Noor Jehan was born into a Punjabi Muslim family in Kasur, Punjab, British India and was one of the eleven children of Imdad Ali and Fateh Bibi. 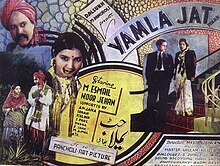 Her career in British India 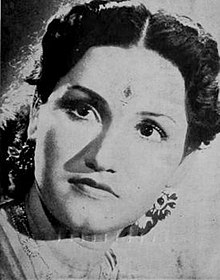 Jehan began to sing at the age of five and showed a keen interest in a range of styles, including traditional folk and popular theatre. Realising her potential for singing, her mother sent her to receive early training in classical singing under Ustad Bade Ghulam Ali Khan. He instructed her in the traditions of the Patiala Gharana of Hindustani classical music and the classical forms of thumri, dhrupad, and khayal.

At the age of nine, Noor Jehan drew the attention of Punjabi musician Ghulam Ahmed Chishti, who would later introduce her to the stage in Lahore. He composed some ghazals, na`ats and folk songs for her to perform, although she was more keen on breaking into acting or playback singing. Once her vocational training finished, Jehan pursued a career in singing alongside her sister in Lahore, and would usually take part in the live song and dance performances prior to screenings of films in cinemas.

Theatre owner Diwan Sardari Lal took the small girl to Calcutta in early 1930s and the entire family moved to Calcutta in hopes of developing the movie careers of Allah Wasai and her older sisters, Eiden Bai and Haider Bandi. Mukhtar Begum encouraged the sisters to join film companies and recommended them to various producers. She also recommended them to her husband, Agha Hashar Kashmiri, who owned a maidan theatre (a tented theatre to accommodate large audiences). It was here that Wasai received the stage name Baby Noor Jehan. Her older sisters were offered jobs with one of the Seth Sukh Karnani companies, Indira Movietone and they went on to be known as the Punjab Mail.

In 1935, K.D. Mehra directed the Punjabi movie Pind di Kuri in which Noor Jehan acted along with her sisters and sang the Punjabi song “Langh aja patan chanaan da o yaar”, which became her earliest hit. She then acted in a film called Missar Ka Sitara (1936) by the same company and sang in it for music composer Damodar Sharma. Jehan also played the child role of Heer in the film Heer-Sayyal (1937). One of her popular songs from that period “Shala jawaniyan maney” is from Dalsukh Pancholi’s Punjabi film Gul Bakawli (1939). All these Punjabi movies were made in Calcutta. After a few years in Calcutta, Jehan returned to Lahore in 1938. In 1939, renowned music director Ghulam Haider composed songs for Jehan which led to her early popularity, and he thus became her early mentor.

In 1942, she played the main lead opposite Pran in Khandaan (1942). It was her first role as an adult, and the film was a major success. The success of Khandaan saw her shifting to Bombay, with director Syed Shaukat Hussain Rizvi. She shared melodies with Shanta Apte in Duhai (1943). It was in this film that Jehan lent her voice for the second time, to another actress named Husn Bano. She married Rizvi later the same year. From 1945 to 1947 and her subsequent move to Pakistan, Noor Jehan was one of the biggest film actresses of the Indian Film Industry. Her films: Badi Maa (1945), Zeenat (1945 film), Gaon Ki Gori (1945), Anmol Ghadi (1946), and Jugnu (1947 film) were the top grossing films of the years 1945 to 1947.

In 1947, Rizvi and Jehan decided to move to Pakistan. They left Bombay and settled in Karachi with their family.

Three years after settling in Pakistan, Jehan starred in her first Pakistani film Chan Wey (1951), opposite Santosh Kumar, which was also her first Pakistani film as a heroine and playback singer. Shaukat Hussain Rizvi and Noor Jehan directed this film together, making Jehan Pakistan’s first female director. It became the highest grossing film in Pakistan in 1951. Jehan’s second film in Pakistan was Dopatta (1952) which was Produced by Aslam Lodhi, Directed by Sibtain Fazli and assisted by A. H. Rana as Production Manager. Dopatta turned out to be an even bigger success than Chan Wey (1951).

During 1953 and 1954, Jehan and Rizvi had problems and got divorced due to personal differences. She kept custody of the three children from their marriage. In 1959, she married another film actor, Ejaz Durrani, nine years her junior.

Durrani pressured her to give up acting,and her last film as an actress/singer was Mirza Ghalib (1961). This contributed to the strengthening of her iconic stature. She gained another audience for herself. Her rendition of Faiz Ahmed Faiz’s “Mujh se pehli si mohabbat mere mehboob na maang” is a unique example of tarranum, reciting poetry as a song with superb music of Rasheed Attre in the Pakistani film Qaidi (1962). Jehan last acted in Baaji in 1963, though not in a leading role.

Jehan bade farewell to film acting in 1963 after a career of 33 years (1930–1963). The pressure of being a mother of six children and the demands of being a wife to another fellow film actor, forced her to give up her career. Jehan made 14 films in Pakistan, ten in Urdu and four in Punjabi as a film actress.[citation needed]

After quitting acting she took up playback singing. She made her debut exclusively as a playback singer in 1960 with the film Salma. Her first initial playback singing for a Pakistani film was for the 1951 film Chann Wey, for which she was the film director herself. She received many awards, including the Pride of Performance in 1965 by the Pakistani Government. She sang a large number of duets with Ahmed Rushdi, Mehdi Hassan, Masood Rana, Nusrat Fateh Ali Khan and Mujeeb Aalam.

She had an understanding and friendship with many singers of Asia, for example with Alam Lohar and many more. Jehan made great efforts to attend the “Mehfils” (live concerts) of Ustad Salamat Ali Khan, Ustad Fateh Ali Khan, Ustad Nusrat Fateh Ali Khan and Roshan Ara Begum. Lata Mangeshkar commented on Jehan’s vocal range, that Jehan could sing as low and as high as she wanted, and that the quality of her voice always remained the same. Singing was, for Jehan, not effortless but an emotionally and physically draining exercise.In the 1990s, Jehan also sang for then débutante actresses Neeli and Reema. For this very reason, Sabiha Khanum affectionately called her Sadabahar (evergreen). Her popularity was further boosted with her patriotic songs during the 1965 war between Pakistan and India.

In 1971 Madam Noor Jehan visited Tokyo for the World Song Festival as a representative from Pakistan.

Jehan visited India in 1982 to celebrate the Golden Jubilee of the Indian talkie movies, where she met Indian Prime Minister Indira Gandhi in New Delhi and was received by Dilip Kumar and Lata Mangeshkar in Bombay. She met all her erstwhile heroes and costars, including Surendra, Pran, Suraiya, composer Naushad and others. The website Women on Record stated: “Noor Jehan injected a degree of passion into her singing unmatched by anyone else. But she left for Pakistan”.

In 1991, When Jehan was alive, Vanessa Redgrave invited her to perform at a fundraising event to benefit the children of Middle East held at Royal Albert Hall London. Lionel Richie, Bob Geldof, Madonna, Boy George, and Duran Duran were some of the performers at the star-studded event which was attended, amongst many others, by thespian Sir John Gielgud , Nobel Prize-winning playwright Harold Pinter, and Oscar-winning actor Dame Peggy Ashcroft. She has also sung “Saiyan Saadey Naal”, a song of well-known Pakistani folk singer, songwriter and composer Akram Rahi for the film Dam Mast Kalander/Aalmi Gunday.

In 1944, Noor Jehan married Shaukat Hussain Rizvi of Azamgarh, UP, India. In 1948, Shaukat Rizvi decided to migrate to Pakistan, and Noor Jehan moved too, ending her career in India. She next visited India only in 1982. Her marriage to Rizvi ended in 1953 with divorce; the couple had three children, including their singer daughter Zil-e-Huma. She married Ejaz Durrani in 1959. The second marriage also produced three children but also ended in divorce in 1970. 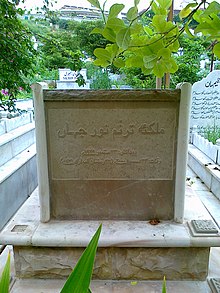 Jehan suffered from chest pains in 1986 on a tour of North America and was diagnosed with angina pectoris after which she underwent bypass surgery. In 2000, Jehan was hospitalised in Karachi and suffered a heart attack. On 23 December 2000 (night of 27 Ramadan), Jehan died as a result of heart failure. Her funeral took place at Jamia Masjid Sultan, Karachi and was attended by over 400,000 people. She was buried at the Gizri Graveyard in Karachi. When she died, President Of Pakistan Pervez Musharraf said that, “She deserves a state funeral”. He ordered her funeral be taken to Lahore from Karachi but her daughters insisted on burying her in Karachi on the night she died. At her death famous writer and poet Javed Akhtar in an interview at Mumbai said that, “In the worst conditions of our relations with Pakistan in 53 years in a very hostile atmosphere our cultural heritage has been a common bridge. Noor Jehan was one such durable bridge, my fear is that her death may have shaken it”.

Noor Jehan received more than 15 Nigar Awards for Best Female Playback Singer, eight for best Urdu Singer Female and the rest for Punjabi playback. She has also been given the award for the Singer Of Millennum.

Noor Jehan was one of my favorite singers and when I listened to her Ghazals, I realized how unusual compositions were those, so I decided to take them to a larger audience which they deserve.

The world will never see a singer like her. Just as people have not seen another Mohammad Rafi and Kishore Kumar there would never be another Noor Jehan

Noor Jehan was the first female singing star of the Indian cinema and helped to lay the foundation of playback singing as we know it. She inspired a generation of singers including Lata Mangeshkar before single-handedly kick-starting music In Pakistan and inspired subsequent generations there.