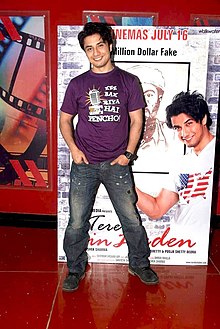 Zafar at the premiere of Tere Bin Laden, 2010

Ali Zafar was born on 18 May 1980 in Lahore, Punjab, Pakistan to a Punjabi family. His parents, Mohammad Zafarullah and Kanwal Ameen, were professors at the University of Punjab. He has two brothers; Zain and Danyal, the latter of these is a commercial model who’s also aiming to launch a career as a singer and actor soon.Zafar received his early education from C.A.A. Public School. He completed his graduation from the Government College of Lahore and the National College of Arts.

Zafar started his career as a sketch artist at Pearl Continental Hotel in Lahore and then began acting in television serials. He debuted as a television actor by acting in drama serials Kollege Jeans, Kanch Ke Par and Landa Bazar. 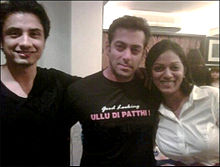 Zafar with Salman Khan at the audio release of the song “Ullu Da Patha” in Dubai, 2010.

Zafar sang “Jugnuon Se Bhar De Aanchal” for the 2003 film Shararat. In the same year, he debuted as a musician with the album Huqa Pani, which was a success. The album sold over 5,000,000 copies worldwide and won several awards and nominations, including the 2004 Lux Style Award for “Best Album” and the 2008 “Best Male Artist” award at the MTV awards, making him one of the most popular pop singers in Pakistan. It was also claimed that Bollywood’s popular music directors Himesh Reshammiya and Pritam ripped “Channo” and “Rangeen” from Zafar’s album in “Dillagi Mein Jo Beet Jaaye” for Aashiq Banaya Aapne and “Chhore Ki Baatein” for Fight Club – Members Only, respectively.[better source needed]

Zafar released his second album Masty in November 2006.The music video of the single “Dekha” was named as the most expensive music video of Pakistan, costing more than ten million rupees. The video was produced by Lux and was shot in Malaysia, featuring Reema Khan, Meera and Aaminah Haq. The song was also made part of the Hollywood film Wall Street: Money Never Sleeps, which was released in September 2010. He is currently the fourth Pakistani artist after Nusrat Fateh Ali Khan, Strings and Atif Aslam to have songs featured in Hollywood films. He also won the “Youth Icon” award in the Lux Style Awards 2007, in Malaysia. Zafar was also offered a role for 2007 film Khuda Kay Liye, but was unable to sign due to some personal reasons. The role was then performed by Fawad Khan.[citation needed]

In 2010, he made his debut as a leading actor with the Bollywood film Tere Bin Laden, which was directed by Abhishek Sharma.Tere Bin Laden was partially based on Osama Bin Laden and Zafar played a Pakistani journalist from Karachi, who makes fake video of Osama Bin Laden, so that he could go to America. The film released in July 2010, proved to be a major commercial success in India, but was banned in Pakistan. Zafar’s performance in the film garnered critical appreciation and earned him Best Male Debut nominations at several award ceremonies, including IIFA Awards, Screen Awards, Zee Cine Awards and Filmfare Awards. He was also named as the first Pakistani to be called to Indian Film Festival at Australia in March 2011 for his movie screening.[citation needed]

In February 2011, Zafar released his third album Jhoom, which won the 2012 Lux Style Award for “Best Music Album”.He made a special appearance in the film Luv Ka The End, in which he sang a song, “F.U.N. Fun Funna”. He also sung the title song for the film Love Mein Ghum. He also acted alongside Tara D’Souza in the film Mere Brother Ki Dulhan, starring Imran Khan and Katrina Kaif, and it was released in September 2011.In March 2012, Zafar starred in the film London, Paris, New York with Aditi Rao Hydari. It was directed by Anu Menon, and Zafar also composed the soundtrack for the film. He then received the Dadasaheb Phalke Award for Best New Talent Male and the Stardust Award for Superstar of Tomorrow – Male for his performances in Mere Brother Ki Dulhan.He also performed the soundtrack for the Pakistani drama Zindagi Gulzar Hai, which won many awards.[citation needed] 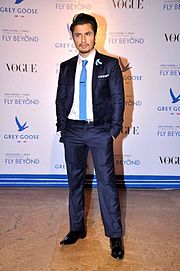 Zafar at India’s Fly Beyond Awards, 2014

Zafar also starred in the romantic comedy film Chashme Baddoor, directed by David Dhawan. The film was released in April 2013 and was declared a box office super-hit. The same year, he was also featured in an episode of Burka Avenger, singing his famous song “Channo”.Zafar then also starred in and composed the soundtrack for the film Total Siyappa, which was a romantic comedy film released in March 2014. He also acted in Kill Dil, which was released in November.

Zafar released a single “Urain Ge” as tribute to victims of APS Peshawar attack in early 2015, featuring many Pakistani artists.His voice was also featured in the song “DJ”, which was sung by Sunidhi Chauhan for the film Hey Bro. He then also sang a song for Defence Day, “Hanstay Hanstay”.[citation needed]

Zafar had performed an item number “Six Pack Abs” in the sequel of his 2010 film Tere Bin Laden, entitled Tere Bin Laden: Dead or Alive, which was released in February 2016. Zafar was also seen in Pakistani film Lahore Se Aagey. He then appeared in Gauri Shinde’s Dear Zindagi as a musician alongside the star cast Alia Bhatt.The films were released in November 2016. He then also sung “Hum Roshan to Kal Roshan”, which released in December 2016.[citation needed]

In 2018, Zafar starred in Ahsan Rahim’s directorial debut romantic action-comedy film Teefa in Trouble, alongside Maya Ali, which is debut of both the actors in Pakistan film industry, and also the debut of Zafar’s Lightingale Productions. He is also working on his fourth music album, and he will be producing another Pakistani film based in Deosai National Park.

Zafar in his concert entitled Dil Jhoom Jhoom by Hum TV, on Valentine 2014

He joined Coke Studio Pakistan in 2008 and performed three original songs “Allah Hu”, “Daastan-e-Ishq” and “Nahi Ray Nahi”, and one tribute song “Yaar Daddi Ishq” to Muhammad Juman, in season one and two.

In 2012, Zafar performed at 11th Lux Style Awards with Humaima Malick and also paid tribute to musician Mehdi Hassan by singing his ghazal “Mujhe Tum Nazar Sai”. He also performed at the Pantaloons Femina Miss India contest held at Bhavans Ground in Mumbai on 30 March 2012. He then performed at GiMA Awards. He also had performed at 57th Filmfare Awards, but his performance was cut out in the TV release.In 2013, he performed along with Shahrukh Khan, Katrina Kaif and Preity Zinta at Temptations Reloaded concert in Muscat, Oman.

Zafar then also performed in the Lifestyle Pakistan Expo at Karachi Expo Centre, where he walked the ramp for designer brand ChenOne and also performed with a dhol. He was also invited to perform in 2013 Cannes Film Festival held at Cannes, France. In 2014, he was seen performing with Yami Gautam on Zee Cine Awards. He then also performed in Naz Choudhury’s Bollywood Showstoppers at The O2 Arena along with Sonakshi Sinha, Jacqueline Fernandez, Mika Singhand Shahid Kapoor.He then also hosted the first Star Box Office India Awards Ceremony along with Ayushmann Khurrana,where they also gave a musical tribute to Raj Kapoor.

He re-joined Coke Studio Pakistan in 2015 for the eight season where he performed three songs. The first song “Rockstar” became popular worldwide, and was also appreciated by Imran Khan, Mahira Khan, Sonu Nigam, Hrithik Roshan and Adnan Sami, and then it was also awarded the title Song of the Year. Zafar then gave tribute to Saleem Raza by performing a second song “Ae Dil” along with Sara Haider. The third song he performed was Sufi “Ajj Din Vehre Vich”.

Zafar performed a dancing act on the remix of his Coke Studio hit “Rockstar” in the ceremony of 14th Lux Style Awards, after when he was given musical tribute by Jimmy Khan, Uzair Jaswal, Sara Haider and Farhan Saeed separately, in 2015. The following year, he hosted the ceremony, where he performed an opening dance act on his new song paying tribute to Lux Style Awards. He then also gave a musical tribute there, co-singing with Ali Sethi and Qurat-ul-Ain Balouch, to Amjad Sabri who was assassinated in Karachi on 22 June 2016.

The same year, he collaborated with Atif Aslam for the song “Yaarian”, and they performed on it on Defence Day. Zafar walken the ramp in September with Mahira Khan, showcasing the bridal collection in Divani’s Bagh-e-Bahar show, at the Haveli Barood Khana. He also performed on the stage of 1st Hum Style Awards along with Sohai Ali Abro, where he was also awarded “Most Stylish Male Performer”. In his concert on 25 November, he performed the mannequin challenge too.

In tenth season of Coke Studio Pakistan, Zafar performed four songs, after being featured in the promo song “Qaumi Taranah”. He performed his original “Julie” alongside his brother Danyal Zafar on guitars under Shani Arshad’s production, and “Yo Soch” with Natasha Khan under Strings production. He also gave tribute to Master Inayat Hussain by performing “Jaan-e-Bahaaraan” solo under Shuja Haider’s production, and to Junaid Jamshed by “Us Rah Par” with Ali Hamza ft. Strings under Jaffer Zaidi’s production.

Zafar married his long-time fiancée Ayesha Fazli, who is a distant relative of Indian actor Aamir Khan,on 28 July 2009 in Lahore, Pakistan. They had a boy in 2010, and a girl in 2015.

On 19 April 2018, fellow singer Meesha Shafi accused Zafar of sexual harassment, stating on Twitter, “Ali is someone I have known for many years and someone I have shared a stage with. I feel betrayed by his behavior and his attitude and I know that I am not alone.” Later that week, more women came forward with their allegations against Zafar.Zafar denied the allegation and said that he would take the matter to court.

He later filed a defamation case against Shafi. The court was requested to impose a fine of Rs 1 billion on her as compensation for the damages. On all the subsequent hearings of the case, Shafi was asked to submit a response to the defamation allegations. However, she failed to appear in court or issue her statement for either of them.

Shafi, on the other hand had also attempted to file a legal case against Zafar on charges of sexual harassment with the federal ombudsman who dismissed her application under the Protection against Harassment of Women at Workplace Act 2010.Later, she appealed this decision to the provincial Governor, who upheld the decision of the Ombudsman, and dismissed the appeal., in May 2019 Meesha Shafi requested court to change judge in the defamation case Ali Zafar filed against her.

Shafi submitted her response to Zafar’s defamation suit on 19 October, and stated that Zafar, “is trying to act innocent before the court”.

On 22 March 2019, a district sessions judge issued orders to wrap up Ali Zafar’s defamation suit against Meesha Shafi by 15 April.. Earlier, on 9 March 2019, Ali Zafar filed a petition against Meesha Shafi over submitting an allegedly fake affidavit in the civil court. The petition stated there is a contradiction in the date mentioned on the affidavit and the account of the events shared in it.

Other awards and honours