Iqbal Masih was born in 1983 in Muridke, a commercial city outside of Lahore in Punjab, Pakistan, into a poor Christianfamily.At age four, he was put to work by his family to pay off their debts.Iqbal’s family borrowed 600 rupees(less than USD$6.00) from a local employer who owned a carpet weaving business. In return, Iqbal was required to work as a carpet weaver until the debt was paid off. Every day, he would rise before dawn and make his way along dark country roads to the factory, where he and most of the other children were tightly bound with chains to the carpet looms to prevent escape. He would work 120 hours a week, seven days a week, with only a 30-minute break. He made 1 rupee a day for the loan, but the loan continued to increase because of his family and interest.

At the age of 10, Iqbal escaped his slavery, after learning that bonded labour was declared illegal by the Supreme Court of Pakistan.He escaped and then went to the police to report Arshad, but the police brought him back to Arshad, who told the police to tie him upside down if he tried to escape again. Iqbal escaped a second time and he attended the Bonded Labour Liberation Front (BLLF) School for former child slaves and quickly completed a four-year education in only two years.Iqbal helped over 3,000 Pakistani children that were in bonded labour to escape to freedom and made speeches about child labour throughout the world.

He expressed a desire to become a lawyer to better equip him to free bonded labourers, and he began to visit other countries including Sweden and the United Statesto share his story, encouraging others to join the fight to eradicate child slavery.

In 1994 he received the Reebok Human Rights Award in Boston and in his acceptance speech he said: “I am one of those millions of children who are suffering in Pakistan through bonded labour and child labour, but I am lucky that due to the efforts of Bonded Labour Liberation Front (BLLF), I go out in freedom I am standing in front of you here today. After my freedom, I joined BLLF School and I am studying in that school now. For us slave children, Ehsan Ullah Khan and BLLF have done the same work that Abraham Lincoln did for the slaves of America. Today, you are free and I am free too.”

“Iqbal Masih, a brave and eloquent boy who attended several international conferences to denounce the hardships of child weavers in Pakistan, was shot dead with a shotgun while he and some friends were cycling in their village of Muridke, near Lahore”.

Iqbal was fatally shot by Ashraf Hero, a heroin addict, while visiting relatives in Muridke, Pakistan on 16 April 1995, Easter Sunday.He was 12 years old at the time. His mother said she did not believe her son had been the victim of a plot by the “carpet mafia”. However, the Bonded Labour Liberation Front disagreed because Iqbal had received death threats from individuals connected to the Pakistani carpet industry.

His funeral was attended by approximately 800 mourners. The Little Hero: One Boy’s Fight for Freedomtells the story of his legacy.

Following his death, Pakistani economic elites responded to declining carpet sales by denying the use of bonded child labor in their factories and employing the Federal Investigation Agency (FIA) to brutally harass and arrest activists working for the Bonded Labour Liberation Front (BLLF). The Pakistani press conducted a smear campaign against the BLLF, arguing that child laborers receive high wages and favorable working conditions. 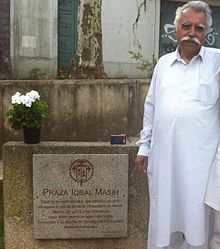