Nazimuddin was born into an aristocratic and wealthy family of the Nawabs of Dhaka, Dacca, Bengal, on 19 July 1894. His father was Khawaja Nizamuddin and paternal grandfather was Khwaja Fakhruddin. He was the maternal grandson of Nawab Sir Khwaja Ahsanullah and his mother, Nawabzadi Bilqis Banu, was notable for her own statue.Nazimuddin had a younger brother, Khwaja Shahabuddin, who would later played a vital role in national politicsonwards. Being of Kashmiri-Bengali descent, his family spoke both Urdu and Bengali. They were the first cousin of Nawab Khwaja Habibullah son of Nawab Sir Khwaja Salimullah Bahadur who helped laid foundation of Muslim League in 1906.

He was educated at the Dunstable Grammar School in England but returned to India following his matriculation where he enrolled to attend the MAO College of the Aligarh Muslim University (AMU) in Uttar Pradesh, India. Nazimuddin secured his graduation with a BA degree in sociology from AMU and was sent back to England to pursue higher education. During his time at AMU, he was known to be an avid tennis player and excelled in this sport when he represented his university in collegiate games.:76

After AMU, Nazimuddin went to England and attended Trinity College at Cambridge University. He was granted his MA degree in English by Cambridge University.:449–450 His training in England enabled him to practice law and become a Barrister-at-Law in England. He was knighted in 1934.In 1947–49, Nazimuddin was granted the degree of Doctor of Laws by the vice-chancellor of Dhaka University, Dr. Mahmud Hasan.:161

Nazimuddin returned to India to join his brother Khwaja Shahbuddin from England, taking interest in civil and public affairs that led him to join the Bengali politics. Both brother joined the Muslim League, and Nazimuddin successfully ran for the municipality election and elected as Chairman of Dhaka Municipality from 1922 until 1929. During this time, he was appointed as Education minister of Bengal. He remained minister of Education till 1934. Later he was appointmented in Viceroy’s Executive Council in 1934 which he served until 1937.

He participated in regional elections held on 1937 on a Muslim League’s platform but conceded his defeat in favor of Fazlul Haq of Krishak Praja Part (KPP) who was appointed as Prime Minister of Bengal, while assuming his personal role as member of the legislative assembly.:69

In the India Office Records, Political and Secret Department Records (1756–1950), Category L/P&S, Record 5/250, 3/79, one comes across the Fortnightly Report (February 1947) to the Viceroy by the then Governor of Punjab Sir Evan Jenkins. According to this report when inquired about the Pakistan project, Khawaja Nazimuddin candidly told him that ″he did not know what Pakistan means and that nobody in the Muslim League knew.″ This remark clearly shows that so few as six months before the creation of Pakistan, even senior Muslim League leaders had no clarity as to the basic features of the State they were asking for.

Upon the formation of the coalition government in an agreement facilitated between Muslim League and the Krishak Praja Party, Nazimuddin was appointed as the home minister under Haq’s premiership., which he continued until 1943.

Due to his conservative elite position, he became close associate of Muhammad Ali Jinnah, then-president of the Muslim League, who appointed him as a member of the executive committee to successfully promote Muslim League’ party agenda and program that gained popularity in East Bengal. In 1940–41, Nazimuddin broke away from the coalition led by Premier Fazlul Haq and decided to become a leader of the opposition, leading campaign against Haq’s premiership and primarily focused on Bengali nationalism issues. In 1943, Nazimuddin took over the government from Premier Haq when the latter was dismissed by the governor, John Herbert, amid controversies surrounding in his political campaigns.During this time, Nazimuddin played a crucial political role for the cause for the separate Muslim homeland, Pakistan.About his role, he was asked about the “Pakistan question” by British Governor Richard Casey in 1945 but he showed very little and no interests in discussing the existence of the movement and reportedly quoting: he did not know what Pakistan means and nobody in Muslim League knew.”

His premiership lasted until 1945 when a motion of no confidence and faced with defeat in the assembly hall by 160 to 97 votes that effectively ended his premiership. He relinquished the office to Nausher Ali, an Indian nationalist Muslim and a prominent member of Congress Party who the speaker of the assembly, but the administration was taken over by Huseyn Shaheed Suhrawardy.

From 1945 to 1947, Sir Nazimuddin continued to be served as the chairman of the Muslim League in Bengal, ardently supporting the political cause for Pakistan against the Congress Party.During this time, he had been in brief conflict with Premier Suhrawardy and strongly opposed the United Bengal Movement and led a strong parliamentary opposition in the assembly against Suhrawardy’s administration in April 1947. The conflict between two men mainly existed because Suhrawardy had represented the middle class while Nazimuddin was representing the aristocracy in the assembly.

As the Chief Minister, he led the motion of confidence that ultimately voted in favor of joining the Federation of Pakistan and reorganized the Government of East Pakistan by delegating conservative members in his administration.

On 14 August of 1947, Governor-General Muhammad Ali Jinnah relinquished the party presidency of the Pakistan Muslim League (PML) to Khawaja Nazimuddin who took over the party of President of Pakistan Muslim League (PML), due to his party electoral performance. On 1 November 1947, he was appointed as actingGovernor-General in the absence of Governor-General Jinnah due to worsening health, and eventually appointed as Governor-General after passing of Muhammad Ali Jinnah, in a crucial support provided by Prime Minister Liaquat Ali Khan on 14 September 1948 to the president Nazimuddin. His oath of office was supervised by Chief Justice Sir Abdul Rashid of the Supreme Court of Pakistan, in attendance with Prime Minister Liaquat Ali Khan.

As Governor-General, Nazimuddin set a precedent of neutrality and non-interference in the government, and provided his political support to Prime Minister Liaquat Ali Khan’s government, which was seen as essential to the working of the responsible government at that time.:102

His role as Governor-General reflected a conservative mind-set and he spoke against secularism in the country.

I do not agree that religion is a private affair of the individual nor do I agree that in an Islamic state every citizen has identical rights, no matter what his caste, creed or faith be …

In 1949, Governor-General Nazimuddin established the parliamentary committee, the Basic Principles Committee, on the advice of Prime Minister Ali Khan to underlying basic principles that would lay foundation of Constitution of Pakistan.

In 1950, Nazimuddin released an official policy statement and declared that: “Pakistan would remain incomplete until the whole of Kashmir is liberated.”

After the assassination of Liaqat Ali Khan in 1951, the Muslim League leaders asked Governor-General Nazimuddin to take over the business of the government as well as the party’s presidency as there was no other person found suitable for the post. He appointed Finance Minister Sir Malik Ghulam as Governor-General’s post. Nazimuddin’s government focused towards promoting the political programs aimed towards conservative ideas. During his time in office, a framework was begun for a constitution that would allow Pakistan to become a republic, and end its Dominion status under the English monarchy.

Nazimuddin’s administration took place during a poor economy and the rise of provincial nationalism in four provinces and East Bengalwhich made him unable to run the country’s affairs effectively. By 1951–52, the Muslim League had split into two different factions dominated by the Bengali chapter and Punjab-Sindh chapter, as those were the two largest ethnic demographics, but were separated by India.

In 1951, Prime Minister Nazimuddin’s government conducted the country’s first nationwide census where it was noted that 57% population of the country was Indian immigrants, mostly residing in Karachi that further complicated the situation in the country.:xxx In January 1952, Prime Minister Nazimuddin publicly announced in Dacca’s meeting that: Jinnah had been right: for the sake of Pakistan’s national unity, Urdu must be the official language of Pakistan–East and West.:153 On 21 February 1952, a demonstration in the Bengali Language movement demanding equal and official status to the Bengali language turned bloody, with many fatalities caused by police firings.This demonstration was held when he declared Urdu the National Language of Pakistan, following the previous statement of Muhammad Ali Jinnah that Urdu shall be ‘one and only’ language of Pakistan.

In 1953, a violent religious movement led by far-right Jamaat-e-Islami began to agitate for the removal of the Ahmadi religious minority from power positions, and demanded a declaration of this minority as non-Muslims.

Nazimuddin was held morally responsible for riots being spread and resisted such pressures; but mass rioting broke out in Punjab against both the government and followers of this religious minority. Prime Minister Nazimuddin responded to the violence by dismissing the Chief Minister of Punjab, Mumtaz Daultana, to Feroze Khan, but the decision came late.He declared martial law, with approval coming from Governor-General Malik Ghulam, and enforced through Lieutenant General Azam Khan who successfully quelled the agitation.

The agitations and violence spread through the successful Bengali language movement and the riots in Lahore proved the inability of Prime Minister Nazimuddin’s government as he was widely seen as weak in running the government administration.

Nazimuddin then requested the Supreme Court of Pakistan’s intervention against this action but the Chief Justice, Moh’d Munir did not rule on the legality of the dismissal, but instead forced new elections to be held in 1954.Governor-General Malik Ghulam appointed another Bengali politician, Muhammad Ali Bogra who was then tenuring as the Pakistan ambassador to the United States, as the new prime minister until the new elections to be held in 1954. The dismissal of Sir Khawaja Nazimuddin’s administration, the prime minister, by the governor-general, Malik Ghulam, signalled a troubling trend in political history of the country. 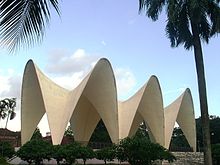 Mausoleum of three leaders at Dhaka

Even after his dismissal, he and his family remained active in parliamentary politics; his nephew, Khwaja Wasiuddin, an army general serving as GOC-in-C II Corps and later repatriated to Bangladesh in 1974.

His younger brother, Shahabuddin, remained active in the politics and eventually ascended as Information minister in the President Ayub Khan’s administration. Sir Khawaja died in 1964, aged 70. He was buried at Mausoleum of three leadersin his hometown of Dhaka. He is considered a betrayer by Bengalis as he called the language movement protesters Communists.

Nazimuddin and his brother, Shahabuddin, belonged to an aristocrat wealthy family who were known for their wealth. In thesis written by Joya Chatterji, Nazimuddin was described for unquestionable loyalty to British administration in India:

Short statured with a bulging pear-like figure, he was known for his insatiable appetite and his unfailing submission to the … Britishers … Dressed in British-styled Sherwani and breechers-like Churidar pajamas with a Fez cap and wearing little shoes, he carried a… cane of knob and represented an age and tradition.

By 1934, the family had estates that covered almost 200,000 acres and was well spread over different districts of Eastern Bengal, together with properties in Shillong, Assam and Kolkata, had an yearly rent of ₤120,000 ($2,736,497.94 in 2017). By 1960s, the majority of estate was relocated from East Pakistan to the different areas of Pakistan, leaving very little of his estate in East.

In his honour, the Pakistan Post issued a commemorative stamp in accordance to his respect.