Lal Shahbaz Qalandar, son of Ibrahim Kabeeruddin, was born in Maiwand, today’s Afghanistan. He was a SunniMuslim and his ancestors had migrated from Baghdad, Iraq and settled in Mashhad, Iran before moving to Maiwand. He lived when the Ghaznavid and Ghurids ruled in the Indus region(today’s Punjab, Pakistan).

A contemporary of Rumi, he travelled around the Muslim world and settled in Sehwan, Sindh where he was eventually buried. There is evidence of his presence in Sindh in 1196 when he met Pir Haji Ismail Panhwar of Paat and he is believed to have arrived in Sehwan around 1251. There he established a meeting house (khanqah), taught in the Fuqhai Islam Madarrsah and wrote his treatises Mizan-us-Surf, Kism-e-Doyum, Aqd and Zubdah. Lal Shahbaz lived a celibate life.

In Multan, he met Baha-ud-din Zakariya of the Suhrawardiyya order, Baba Fariduddin Ganjshakar of the Chishtiyya and Syed Jalaluddin Bukhari. The friendship of these four became legendary, they were known as the Chahar Yar (In Persian “the four friends”). According to some historians, the four friends visited various parts of Sindh, Punjab (in present-day Pakistan) and southern part of India.

Shahbaz became a profound scholar of religions, fluent in many languages including Pashto, Persian, Turkish, Arabic, Sindhi and Sanskrit. This was also the time period when Ghiyas ud din Balban (reigned: 1266 – 1287) ruled India.

Following his death, Hindus within Sindh began to identify Lal Shahbaz Qalandar as an incarnation of their patron deity, Jhulelal. This connection was emphasized by the popular spiritual song Dama Dam Mast Qalandar which referred to him by the name Jhulelal. Over time, the Jhulelal has become a nickname for him, among both Hindu and Muslim Sindhis. 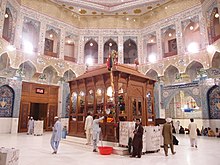 Interior of the shrine of Lal Shahbaz Qalandar in Sehwan

The shrine of Lal Shahbaz Qalandar was built in 1356 and decorated with Sindhi ‘kashi-tiles’, mirror-work and a gold-plated door donated by the Shah of Iran, Reza Shah Pahlavi and installed by the late Prime Minister of Pakistan, Zulfikar Ali Bhutto. The inner sanctum is about 100 square yards with a silver-canopied grave in the middle, according to Nadeem Wagan, Cutharo silver donated by Sardar Mahboob Ali Khan Wagan (Chief Sardar of Wagan Tribe) on one side of the marble floor is a row of about 12-inch-high (300 mm) folding wooden stands, on which there is a set of copies of the Quranfor devotees to read. On the other side, beside a bundle of incense, are rows of oil-lamps lighted by devotees. Thousands of devotees visit the tomb particularly every Thursday.

Lal Shahbaz’s annual Urs (death anniversary), held on the 18 Sha’aban – the eighth month of the Muslim lunar calendar, brings more than two million pilgrims from all over Pakistan and abroad. On each morning of the three-day feast, the narrow lanes of Sehwan are packed with pilgrims, fakirs and devotees making their way to the shrine to commune with the saint, offer tributes and ask for their wishes. (Sao Sumar) singing from 6 am till 8 am the next day. They invite bands of folk-singers (mandali) from different regions each year.

On 16 February 2017, the Islamic State’s Khorasan faction claimed responsibility for a suicide bombing on the shrine which resulted in the deaths of 88 people.The following morning, the shrine’s caretaker continued the daily tradition of ringing the shrine’s bell at 3:30 AM and stated that he would not be intimidated by terrorists and that the shrine’s weekly dhamaal, or meditative dancing ceremony, was to resume the evening following the attack.

Pakistani government and security forces launched an immediate nationwide security crackdown, claiming to have killed 37 militants by the following day.

In poetry and prose