Aly Khan was born in Turin, Italy, the younger son and only surviving child of the Aga Khan III and Cleope Teresa “Ginetta” Magliano. His father was born in Karachi, British India (now in modern-day Pakistan). His mother was Italian. His paternal grandfather was born in Iran. He had two brothers: Prince Giuseppe Mahdi Aga Khan (who died in 1911) and, by his father’s third marriage, Sadruddin Aga Khan. Aly Khan was educated by private tutors in India and France during his childhood. He later trained in England as a lawyer.

In 1939, Prince Aly Aga Khan joined the French Foreign Legion and served with its cavalry division in Egypt and the Middle East. In 1940, he joined the Royal Wiltshire Yeomanry, becoming a lieutenant colonel in 1944. That same year, he participated in the Allied landing in the south of France with the United States Seventh Army, serving as a liaison officer with the rank of captain; for this, he was made an officer in the Legion of Honor in 1950.

He also was awarded the Croix de Guerre and the United States Bronze Star Medal.

Prince Aly Khan was installed as the 1st Colonel of the Regiment of the newly raised 4 Cavalry Regiment (1 November 1956), Pakistani Army in a military ceremony during 1957 and he retained this honor until his death.

Ambassador of Pakistan to the United Nations

In November 1957 Aly Khan met President Iskander Mirza of Pakistan and was offered a post as the country’s Ambassador to the United Nations. The formal announcement of the appointment was made on 6 February 1958.

As a member of the United Nations Political and Security Committee representing Pakistan, Aly Khan’s brief U.N. posting was viewed with surprise by many observers, some of whom considered him “the Asian-African answer to Irene Dunne”. An American movie star not known for her political skills, Dunne had recently been designated a member of the United States delegation at General Assembly, largely in recognition of her Republican fundraising efforts.

He was elected a vice president of the United Nations General Assembly on 17 September 1958 and also served as chairman of the U.N.’s Peace Observation Committee.

He married his first wife the Hon. Joan Barbara Guinness (née Yarde-Buller, 1908–1997). She was the former wife of Group Capt. Thomas Loel Guinness, a member of Parliament, and a daughter of the 3rd Baron Churston. The wedding took place in Paris on 18 May 1936, a few days after Joan Guinness’s divorce became absolute. Before the wedding, the bride converted to Islam and took the name Tajuddawlah.

“I had been involved with several women”, he said of his playboy period of his life, which included high-profile lovers such as the British debutante Margaret Whighamand Thelma, Viscountess Furness, an American who was simultaneously involved with the Prince of Wales.”I was tired of trouble. Joan was a sane and solid girl, and I thought if I married her, I would stay out of trouble.”

He had been named co-respondent in the Guinness v Guinness and Khan divorce suit, with Loel Guinness citing as evidence that his wife and the Prince had occupied a hotel room together from 17 May until 20 May 1935 and that his wife had told him that she “had formed an attachment for him and desired her husband to divorce her”. The case was uncontested, and Aly Khan was ordered to pay all costs.

The couple were married by civil ceremony in May 1936, and their first child, Prince Karim, was born premature in Geneva, seven months later on December 13, 1936; they also had a second son, Prince Amyn Muhammad Aga Khan, who was also born premature in seven months the next year. By this marriage, he had a stepson, Patrick Guinness.

They divorced in 1949, in part due to his extramarital affairs with, among others, Pamela Churchill. After the divorce, Princess Tajuddawlah became the longtime mistress and eventual wife of the newspaper magnate Seymour Berry, 2nd Viscount Camrose. 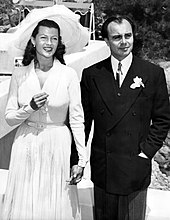 Rita Hayworth and Aly Khan at their wedding reception in the garden of the Château de l’Horizon, near Cannes (27 May 1949)

On 27 May (civil) and 28 May (religious) 1949, in Cannes, France, Aly Khan married American film star Rita Hayworth, who left her film career to marry him.

Aly Khan and his family were heavily involved in horse racing, owning and racing horses. Hayworth had no interest in the sport, but became a member of the Del Mar Thoroughbred Club anyway. Her filly, Double Rose, won several races in France and finished second in the 1949 Prix de l’Arc de Triomphe.

In 1951, while still married to Hayworth, Khan was spotted dancing with the actress Joan Fontaine in the nightclub where he and his wife had met. Hayworth threatened to divorce him in Reno, Nevada, US. In early May, Hayworth moved to Nevada to establish legal residence to qualify for a divorce. She stayed at Lake Tahoe, Nevada with their daughter, saying there was a threat the child would be kidnapped. Hayworth filed for divorce from Khan on 2 September 1951, on the grounds of “extreme cruelty, entirely mental in nature.”

Hayworth once said she might convert to Islam, but did not. During the custody fight over their daughter, Princess Yasmin Aga Khan, born 26 December 1949, the Prince said he wanted her raised as a Muslim; Hayworth (who had been raised a Roman Catholic) wanted the child to be a Christian.

Aly Khan and Rita Hayworth divorced in 1953. Hayworth rejected his offer of $1,000,000 if she would rear Yasmin as a Muslim from age seven and allow her to go to Europe to visit with him for two or three months each year.

“Nothing will make me give up Yasmin’s chance to live here in America among our precious freedoms and habits,” declared Hayworth. “While I respect the Muslim faith and all other faiths it is my earnest wish that my daughter be raised as a normal, healthy American girl in the Christian faith. There isn’t any amount of money in the entire world for which it is worth sacrificing this child’s privilege of living as a normal Christian girl here in the United States. There just isn’t anything else in the world that can compare with her sacred chance to do that. And I’m going to give it to Yasmin regardless of what it costs.”

While still married to Rita Hayworth, Khan began a relationship with American film and stage actress Gene Tierney, whom he was engaged to marry in 1952; while Gene mentioned their engagement a few times, it was never formally announced. His father, however, strongly opposed the union with another Hollywood actress. After a year-long engagement, Tierney separated from the Prince and moved back to the United States to tend to her mental health.In the late 1950’s Aly was known to start dating the fashion model Simone Micheline Bodin (who called herself Bettina Graziani). She was persuaded by Prince Aly Khan to retire from modelling and settle down. By the 1960’s Bettina and Prince were engaged and expecting a child, whom she miscarried after being in a car accident.

On 12 July 1957, upon the reading of the will of the Aga Khan III, Aly Khan’s eldest son, Karim Aga Khan, then a junior at Harvard University, was named Aga Khan IVand 49th Imam of the Ismailis. It was the first time that the descent from father to son was circumvented in the community’s 1,300-year history.According to the Aga Khan’s will, a statement of which was presented to the press by his secretary:

“In view of the fundamentally altered conditions in the world in very recent years due to the great changes that have taken place, including the discoveries of atomic science, I am convinced that it is in the best interests of the Shia Muslim Ismaili community that I should be succeeded by a young man who has been brought up and developed during recent years and in the midst of the new age, and who brings a new outlook on life to his office.” 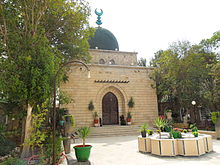 On 12 May 1960, a little more than two years after his appointment as Pakistan’s Ambassador to the UN, Aly Khan sustained massive head injuries in an automobile accident in Suresnes, France, a suburb of Paris, when the car he was driving collided with another vehicle at the intersection of boulevard Henri Sellier and rue du Mont Valerien, while he and his pregnant fiancée, Bettina, were heading to a party. He died shortly afterward at Foch Hospital (in Suresnes). Bettina survived with a minor injury to her forehead, though the shock of the accident would result in a miscarriage. The prince’s chauffeur, who was in the back seat, also survived, as did the driver of the oncoming car.

Aly Khan was first buried on the grounds of Château de l’Horizon, his home in the south of France, where it was intended that he would remain until a mausoleum was built for him in Syria. His remains were removed to Damascus, Syria, on 11 July 1972, and he was reinterred in Salamiyah, Syria.

His fortune went almost entirely to his children, although Bettina received a $US280,000 bequest.

Due to his well-publicized romances, Prince Aly Khan was mentioned in a verse of Noel Coward’s 1950’s lyrics for Cole Porter’s 1928 song “Let’s Do It, Let’s Fall in Love”: “Monkeys whenever you look do it / Aly Khan and King Farouk do it/Let’s do it, let’s fall in love.”

Lucille P. Markey, owner of Calumet Farm Thoroughbred racing stable in Lexington, KY, named one of her outstanding colts, “Alydar” in his honor because she always addressed the prince as, “Aly Darling”.

In the 20 May 2012 episode of Mad Men, Don Draper mentions that he thought Joan Harris was seeing “Ali Khan” given the frequency of flower deliveries to her office.

In a “Honeymooners” episode titled “the Golfer”, which first aired on 15 October 1955, Alice Kramden when asked about the whereabouts of her husband Ralph, facetiously exclaims……”He’s out tiger hunting with Aly Khan.”