Ghulam Mohammad Baksh Butt was born in the Amritsar district village of Jabbowal into a Kashmiri Muslim family of wrestlers in the Punjab region of Northern India. He came from a wrestling family which was known to produce world-class wrestlers.[citation needed] The Butt family is believed by historians to originally have been Kaundinya gotra Hindu Brahmins who were forcibly converted to Islam during the Muslim invasion of Kashmir. Gama had two wives: one in Punjab and the other in Baroda, Gujarat, India.[citation needed]

After the death of his father Muhammad Aziz Baksh when he was six, Gama was put under the care of his maternal grandfather Nun Pahalwan.[citation needed] Following his death, Gama was taken care of by his uncle Ida, another wrestler, who also began training Gama in wrestling.[citation needed] He was first noticed at the age of ten, in 1888, when he entered a strongman competition held in Jodhpur, which included many grueling exercises such as squats. The contest was attended by more than four hundred wrestlers and Gama was among the last fifteen and was named the winner by the Maharaja of Jodhpur due to his young age. Gama was subsequently taken into training by the Maharaja of Datia. 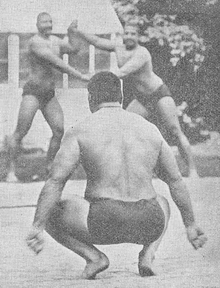 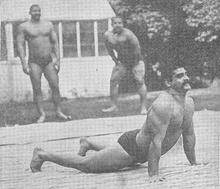 Gama’s daily training consisted of grappling with forty of his fellow wrestlers in the akhada (court). He did a minimum of five thousand baithaks (Hindustani word for squats) (avg. speed 100-200 squats per minute) and three thousand dands (Hindustani word for pushups) (avg. speed 50-100 pushups per minute) in a day and even sometimes more within 30 to 45 minutes each by wearing a doughnut-shaped wrestling apparatus called a Hasli of 1 Quintal (apprx. 100 kilos).Gama’s diet included

and other ingredients to promote his digestive system and muscular health.[not in citation given]

Fame came to Gama in 1895, at the age of 17 when he challenged then-Indian Wrestling Champion, middle-aged Raheem Bakhsh Sultani Wala, another ethnic Kashmiri wrestler from Gujranwala, now in Punjab, Pakistan.[citation needed] At about 7 feet tall, with a very impressive win-loss record, Raheem was expected to easily defeat the 5’7″ Gama. Raheem’s only drawback was his age as he was much older than Gama, and near the end of his career. The bout continued for hours and eventually ended in a draw.[citation needed] The contest with Raheem was the turning point in Gama’s career. After that, he was looked upon as the next contender for the title of Rustam-e-Hind or the Indian Wrestling Championship. In the first bout Gama remained defensive, but in the second bout, Gama went on the offensive. Despite severe bleeding from his nose and ears, he managed to deal out a great deal of damage to Raheem Bakhsh.[citation needed]

By 1910, Gama had defeated all the prominent Indian wrestlers who faced him except the champion, Raheem Bakhsh Sultani Wala (the Rustam-e-Hind or the lineal champion of India). At this time, he focused his attention on the rest of the world. Accompanied by his younger brother Imam Bakhsh, Gama sailed to England to compete with the Western wrestlers but could not gain instant entry, because of his lower height.

In London, Gama issued a challenge that he could throw any three wrestlers in thirty minutes of any weight class. This announcement however was seen as a bluff by the wrestlers and their wrestling promoter R. B. Benjamin. For a long time no one came forward to accept the challenge. To break the ice, Gama presented another challenge to specific heavy weight wrestlers. He challenged Stanislaus Zbyszko and Frank Gotch, either he would beat them or pay them the prize money and go home. The first professional wrestler to take his challenge was the American Benjamin Roller. In the bout, Gama pinned Roller in 1 minute 40 seconds the first time, and in 9 minutes 10 seconds the other. On the second day, he defeated 12 wrestlers and thus gained entry to official tournament.

He was pitted against world champion Stanislaus Zbyszkoand the date of bout was set as 10 September 1910. Zbyszko was then regarded among the premier wrestlers in the world; and he would then take on the mammoth challenge of India’s feared Great Gama, an undefeated champion who had been unsuccessful in his attempts to lure Frank Gotch into a match. And so, on September 10, 1910, Zbyszko faced the Great Gama in the finals of the John Bull World Championships in London.[citation needed] The match was £250 in prize money and the John Bull Belt. Within a minute, Zbyszko was taken down and remained in that position for the remaining 2 hours and 35 minutes of the match. There were a few brief moments when Zbyszko would get up, but he just ended back down in his previous position. Crafting a defensive strategy of hugging the mat in order to nullify Great Gama’s greatest strengths, Zbyszko wrestled the Indian legend to a draw after nearly three hours of grappling, though Zbyszko’s lack of tenacity angered many of the fans in attendance.[citation needed] Nevertheless, Zbyszko still became one of the few wrestlers to ever meet the Great Gama without going down in defeat; The two men were set to face each other again on September 17, 1910. On that date, Zbyszko failed to show up and Gama was announced the winner by default. He was awarded the prize and the John Bull Belt. Receiving this belt entitled Gama to be called Rustam-e-Zamana or World Champion but not the lineal champion of the world as he hadn’t defeated Zbyszko in the ring.

Bouts against American and European champions

During this tour Gama defeated some of the most respected grapplers in the world, “Doc” Benjamin Roller of the United States, Maurice Deriaz of Switzerland, Johann Lemm (the European Champion) of Switzerland, and Jesse Peterson (World Champion) from Sweden. In the match against Roller, Gama threw “Doc” 13 times in the 15-minute match.[citation needed] Gama now issued a challenge to the rest of those who laid claim to the World Champion’s Title, including Japanese Judo champion Taro Miyake, George Hackenschmidt of Russia and Frank Gotch of the United States – each declined his invitation to enter the ring to face him. At one point, to face some type of competition, Gama offered to fight twenty English wrestlers, one after another. He announced that he would defeat all of them or pay out prize money, but still no one would take up his challenge.[citation needed]

Shortly after his return from England, Gama faced Raheem Bakhsh Sultani Wala in Allahabad. This bout eventually ended the long struggle between the two pillars of Indian wrestling of that time in favour of Gama and he won the title of Rustam-e-Hind or the lineal Champion of India. Later in his life when asked about who was his strongest opponent, Gama replied, “Raheem Bakhsh Sultani Wala”.[citation needed]

After beating Raheem Bakhsh Sultani Wala, Gama faced Pandit Biddu[citation needed], who was one of the best wrestlers in India of that time (1916), and beat him.

In 1922, during a visit to India, the Prince of Wales presented Gama with a silver mace.

Gama did not have any opponents until 1927, when it was announced that Gama and Zbyszko would face each other again. They met in Patiala in January 1928.Entering the bout, Zbyszko “showed a strong build of body and muscle” and Gama, it was reported “looked much thinner than usual”. However, he managed to overpower the former easily and won the bout inside a minute, winning the Indian version of the lineal World Wrestling Championship. Following the bout, Zbyszko praised him, calling him a “tiger”.

At forty-eight years old he was now known as the “Great wrestler” of India.

After defeating Zbyszko, Gama beat Jesse Petersen in February 1929. The bout lasted only one and a half minutes. This was the last bout that Gama fought during his career.[citation needed] In the 1940s he was invited by the Nizam of Hyderabad and defeated all his fighters. The Nizam then sent him to face the wrestler Balram Heeraman Singh Yadav, who was never defeated in his life. The fight was very long. Gama was unable to defeat Heeraman and eventually neither wrestler won. Heeraman was one of the toughest wrestlers for Gama to face.[citation needed]

After the independence and partition of India in 1947, Gama moved to Pakistan. During the Hindu-Muslim riots that broke out at the time of partition, the Muslim Gama saved hundreds of Hindus from mobs in Lahore.Although Gama did not retire until 1952, he failed to find any other opponents. After his retirement, he trained his nephew Bholu Pahalwan, who held the Pakistani wrestling championship for almost 20 years.[citation needed]

The Great Gama died in Lahore, Pakistan on 23 May 1960 after a period of illness. He was given land and monthly pension by the government and supported his medical expenses until his death.

Bruce Lee was an avid follower of Gama’s training routine. Lee read articles about Gama and how he employed his exercises to build his legendary strength for wrestling, and Lee quickly incorporated them into his own routine. The training routines Lee used included “the cat stretch”, and “the squat” (known as “baithak”, and also known as the “deep-knee bend.”).

Today, a doughnut-shaped exercise disc called Hasli weighing 100 kg, used by him for squats and pushups, is housed at the National Institute of Sports (NIS) Museum at Patiala, India.