Malik was born as Zahida Malik in a Punjabi family in Rawalpindi, Punjab, Pakistan to Malik Mohammad Aslam, and his wife, Zeenat Malik.

In 2002, Malik was asked by Prime TV to host a show called Prime Gupshup for them ushering a new direction for her comic skills and she improvised on the hour-long show occasionally mimicking actors.

Malik hosted the Geo TV show Hum Sub Umeed Se Hain, in which she was hailed for her comedic parodies.In 2007, she appeared at the Lux Style Awards and was awarded as being the Most stylish celebrity on the carpet.

In October 2010, Malik appeared in the Indian television reality show Bigg Boss Season 4. She was evicted two weeks before the finals, and was one of the final six contestants out of the original fourteen who had participated. 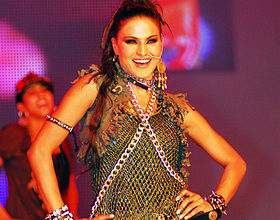 Malik was also part of the finale of the show.After her Bigg Boss stay, she was mentioned in the media as the voice of liberal Muslims, including leading dailies, Daily Times,Express Tribune,and The Australian.Sabbah Hajim, from the Haji Amina Charity Trust in Jammu and Kashmir, writing in the magazine Tehelka, when comparing her with liberal rector of Darul Uloom Deoband said, “these two newly public figures might teach Muslims to stop feeling eternally outraged.”

In February 2011,Veena Malik became part of the Cricket World Cup reality show in Delhi, India, called “Big Toss.” Big Toss was a reality game show with contestants and Malik as the captain of one team, against Rakhi Sawant and her team.

In March 2011, Malik engaged in a passionate debate with a mufti, who claimed she had engaged in immoral behaviour as a contestant on Bigg Boss, even though he admitted to not having watched the show. Malik countered pointing out the double standards of Pakistani media against women among other rebuttals.

Another show Veena Malik – ‘Veena Ka Vivah’ was planned where Malik would search for her soul-mate, but the show was cancelled when Imagine TV, the channel on which the show was being shown, announced that it was shutting down. Malik collected almost 71,000 entries from all over the world for the show.

Before starting as an actress, Malik was a comedian for several television shows and series. She made her acting debut alongside Shaan and Zara Sheikh in Askari’s Tere Pyar Mein (2000), which was a box office hit. She played a supporting role in the film and was barely acknowledged. Later on, she appeared in a supporting role in Javed Sheikh’s Yeh Dil Aap Ka Huwa (2002). 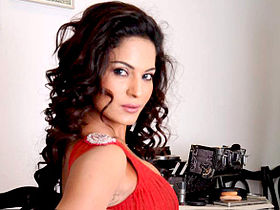 Veena Malik in Lahore, Pakistan in 2011.

In 2003, Malik appeared in Indo-Pak cross venture Punjabi film Pind Di Kudi which failed commercially, however, it was the first Indo-Pak venture film with a budget of approximately 70 million rupees. She also appeared in Askari’s Sassi Punno (2003) alongside Sana and Moammar Rana, however the film failed to do well at Lahore’s cinemas and further screenings stopped in cinemas after a week of its release. She then appeared in Rafique’s Jageer. In 2005, she appeared in a short Punjabi film Bau Badmash (2005) which also failed to garner recognition. Her breakthrough role was in Reema Khan’s Koi Tujh Sa Kahan which was a commercial success in Pakistan. In the same year, she played the parallel lead role of Farwa in fantasy film Naag aur Nagin.

In 2008, Malik appeared in Rafique’s Punjabi film, Mohabbatan Sachiyan, alongside ex-fiancée Babrik Shah and newcomers Maria Khan and Adnan Khan. The film went on to become a commercial success. The same year, she appeared in Raza’s Kabhi Pyar Na Karna in a supporting role, but the film was a flop. Her last film of 2008 was Altaf’s Ishq Beparwah, which also failed to impress the audience. In 2010, she worked in Rafique’s Main Jeena Tere Naal, and Beyg’s debut comedy film Miss Duniya.

In 2012, Malik debuted in Bollywood with an item song in Gali Gali Mein Chor Hai entitled “Chhanno” which was a big hit. Then in the same month she did another item song “Fann Ban Gayi” in Tere Naal Love Ho Gaya. Then she made her acting debut with a comedy Daal Mein Kuch Kaala Hai. The film didn’t do well at the box office but Malik’s performance was widely acclaimed. In 2013, her first film was Rajiv S. Ruia’s social drama Zindagi 50 50 in which she played a prostitute. She appeared in the music video “Ac Chala Garmi Badi Hai” sung by Sukhdeep Grewal. Then she made a special appearance in Punjabi film, Jatts in Golmaal in an item song “Shabboo”. She then made her Kannada film debut and appeared in Dirty Picture: Silk Sakkath Hot in which she portrayed the life of actress Silk Smitha for which she gained 5 kg. The film was a success. Her last film of 2013 was Super Model. The film won The Most Stylish Film Award on International standards. Malik played a supermodel, a small town girl who becomes a success in the fashion industry. Her last Bollywood film was Hemant Madhukar’s Mumbai 125 KM 3D that was released on 17 October 2014.

Malik married businessman Asad Bashir Khan Khattak on 25 December 2013 in Dubai. Malik is Muslim and has stated that she has visited th Kaaba three times. 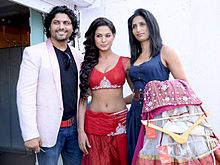 Malik with Riyaz Gangji and Reshma Gangji in a Photoshoot.

Malik has worked as a representative at the World Health Organization for two years.[when?] She also sponsors a child at the SOS Children’s Village, an NGO based in Pakistan working with orphaned children.

Controversy resulted in Pakistan over a nude image of Malik on the cover of FHM magazine India edition in which she had “ISI” written on her upper arm – the initials of Pakistan’s Inter-Services Intelligence spy agency. Malik says she was topless but did not pose completely nude, and has sued the magazine over the images.

In November 2014, Malik and her husband Asad were sentenced to 26 years in prison by a Gilgit court for allegedly airing a blasphemous programme.The owner of Pakistan’s biggest media group, Geo TV and Jang group, was accused of allowing the airing of the blasphemous programme by Geo television in May, which played a religious song while staging a mock marriage of Malik with Bashir. The judge sentenced Malik and Bashir and TV host Shaista Wahidi to 26 years each.