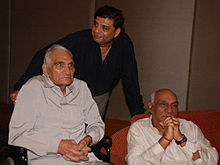 B. R. Chopra (sitting left) and Yash Chopra attending audio release of Naya Daur. At the start of his career Yash Chopra worked as an assistant director for his director-producer older brother, Baldev Raj Chopra.

Chopra was born on 27 September 1932 in Lahore, British India, into a Punjabi Hindu family in British India (now Pakistan).His father was an accountant in the PWD division of the British Punjab administration. He was the youngest of eight children, the oldest of whom was almost 30 years his senior. The eminent film-maker BR Chopra is one of his brothers.

Chopra was largely brought up in the Lahore house of his second brother, BR Chopra, then a film journalist. Chopra went to Jalandhar in 1945 to continue his education, and studied at Doaba College, Jalandhar. He moved to Ludhiana in Punjab (in India) after the Partition. He originally sought to pursue a career in engineering.

His passion for film-making led him to travel to Bombay (now Mumbai), where he initially worked as an assistant director to I. S. Johar, and then for his director-producer brother, Baldev Raj Chopra.

Chopra received his first directorial opportunity in 1959 with the social drama Dhool Ka Phool, produced by his elder brother B.R. Chopra and starring Mala Sinha, Rajendra Kumar and Leela Chitnis. The film revolved around a Muslim bringing up an “illegitimate” Hindu child. The film was well received by critics and became the fourth highest-grossing film of the year. Encouraged by their success, the Chopras made another hard-hitting social drama, Dharmputra (1961).It was one of the first films to depict the Partition of India and Hindu fundamentalism. The film marked the debut of Shashi Kapoor in a fully fledged role and was awarded with the National Film Award for Best Feature Film in Hindi. Theatrical screenings of the film were disrupted by violent demonstrations in response to its raw depiction of the partition riots and related sloganeering and hence became a box office flop. Chopra avoided making political films after that.

Chopra’s collaboration with his brother continued in the form of the 1965 film Waqt,which featured an ensemble cast including Sunil Dutt, Raaj Kumar, Shashi Kapoor, Sadhana, Balraj Sahni, Madan Puri, Sharmila Tagore, Achala Sachdev and Rehman. The film became a commercial and a critical success. It is acknowledged as a “found film” of the “lost and found” genre. Setting many other trends, it was one of Indian cinema’s first multi-starrers,a mode which became increasingly popular among the producers during the 1970s. It also began the now obligatory style of depicting wealth and social class. Chopra received his first Filmfare Best Director Award for the film.

In 1969, Chopra directed two movies produced by his brother. The first was Aadmi Aur Insaan,the Chopra film to feature Dharmendra in the lead. It was an average grosser. He directed Ittefaq (1969), a suspense movie based on a Gujarati play, depicting the events of a single night, with Rajesh Khanna in the lead role. Shot in a month and on a low budget, the film was deemed unusual by critics. It one of the first Hindi films which did not have any songs or an interval. It was eventually declared a semi-hitat the box office and won Chopra another Filmfare award for best director. 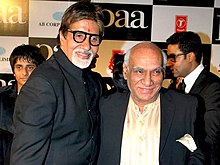 In 1971, Chopra founded the independent Yash Raj Films, terminating his creative collaboration with his brother.His first independently produced film, Daag: A Poem of Love (1973), a melodrama about a man with two wives, with Rajesh Khannain the lead role, was a great success and Chopra won his third Filmfare Award for Best Director for the film.

He directed a number of classic cult films starring Amitabh Bachchan and scripted by Salim-Javed, notably Deewaar and Trishul, which were great hits and remain popular even today. These films set the trend for the late 70s and 80s, establishing Bachchan as the “angry young man”. Chopra won another Filmfare Best Director Award for Deewaar. Chopra produced, directed and scripted two more films starring Bachchan. Unlike his earlier action-oriented films, these two were romantic dramas: Kabhi Kabhie (1976)followed by Silsila (1981).Yash Chopra suggested Javed Akhtar to become a lyricist, starting from this film.

The eighties marked a professional setback in Chopra’s career, as several films he directed and produced in that period failed to leave a mark at the Indian box office. His film Mashaal (1984) was his first collaboration with the legendary actor, Dilip Kumar. The action-oriented film, which was based on the well-known Marathi play titled Ashroonchi Zhali Phule, won critical acclaim, but fared only average at the box office. A year later, he made Faasle. The romantic drama starring Sunil Dutt, Rekha, Rohan Kapoor and Farah was a critical and commercial failure.He and critics consider it his worst film. Vijay (1988)was also a box office failure. The film received mixed reviews from critics and was dubbed a remake of Trishul.

Chopra’s lean phase ended in 1989 with the highly successful cult classic Chandni,a film with all the hallmarks of what has come to be known as the “Yash Chopra style”: heroine-oriented, romantic, emotional, depicting the lifestyle of the super elite, with melodic music used in songs picturised in foreign locations. It marked the first collaboration between the Chopra and Sridevi. The huge success of its music was instrumental in ending the era of violence in Bollywood films and bringing back music into Hindi films. After string of critically and commercially movies, the success of Chandni consolidated Sridevi’s position as the top female Bollywood star of the era. Though it was not the first time Chopra shot a film in Switzerland, the extensive scenes shot there made it a popular tourist destination for Indians. The film won the National Film Award for Best Popular Film of that year.

He followed it with Lamhe (1991), starring frequent collaborators Anil Kapoor and Sridevi. The film was critically acclaimed, had exceptional music, and was one of the biggest Bollywood hits in the overseas market. But it was not a box office success in India. The film won five Filmfare awards, including the Filmfare Award for Best Movie. Over the years the film has been hailed as a cult classic; it is regarded as a modern masterpiece and possibly his finest film to date. It was featured in Outlookmagazine’s list of All-Time Great Indian films. It has been cited by Chopra as his personal favourite of his films. In 1992, Chopra directed Parampara. Despite an all-star cast of Ramya Krishnan, Aamir Khan, Raveena Tandon, Sunil Dutt, Anupam Kher, Vinod Khanna, Ashwini Bhave and Saif Ali Khan (In his film debut), the film was a commercial flop and was panned by critics for its weak storyline, music and direction. 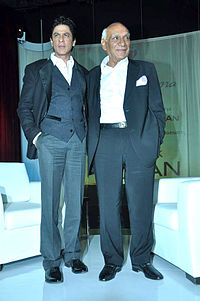 In 1993, Yash Chopra directed the newcomer Shah Rukh Khan along with Juhi Chawla and Sunny Deol in the musical thriller Darr. The movie was the story of an obsessed lover (Khan) and the lengths to which he goes to get the girl (Chawla) who is already happily engaged to another man (Deol). The film was a runaway success and is considered a cult classic today. It also established Khan as a bankable star. Four years later, Chopra then directed, produced and co-wrote the highly successful 1997 musical romantic drama Dil To Pagal Hai, starring yet again Shahrukh Khan in a love triangle with Madhuri Dixit and Karisma Kapoor. It also starred Akshay Kumar in an extended guest appearance. It was the first Bollywood movie to be shot in Germany. The film became the highest grosser for the year. It won many awards, including seven Filmfare Awards and three National Awards, notably for Best Film, providing popular and wholesome entertainment yet again. Chopra then took a sabbatical from directing and focused solely on producing films for over eight years.

In 2004, he returned to direction with the love saga Veer-Zaara.Starring Shahrukh Khan again, Preity Zinta and Rani Mukerji in the leading roles, the film was the biggest hit of 2004 in both India and overseas, with a worldwide gross of over ₹940 million and was screened at the Berlin Film Festival to critical appreciation. The film which narrated the love story of an Indian air-force officer Veer Pratap Singh (Khan) and a Pakistani woman, Zaara Hayaat Khan (Zinta) was appreciated by critics. Rama Sharma from The Tribune wrote: “Giving love its due, Yash Chopra has understandably linked the script to the life of a common man. The pace is exacting. Drawing from the best of the two countries, the story is made more colourful by a spray of the Punjabi culture— be it celebrating Lohri in India or visiting a Dargah in Pakistan. He has handled the script cleverly. Whenever the pace begins to slacken, he introduces a new character and a twist.”

In September 2012, in a special interview with actor Shahrukh Khan on the occasion of his eightieth birthday, Chopra announced that Jab Tak Hai Jaan (2012) would be his last directorial venture and that he would opt to focus on his production company and his personal life. For the shoot of the last remaining song in Jab Tak Hai Jaan, director Yash Chopra wanted to shoot a scene of a sari-clad Katrina Kaif romancing Shah Rukh Khan in the lush meadows of the Swiss Alps. But his illness, caused by a bout of dengue, stymied the plan for the song, which would have reflected his trademark directorial style. Chopra’s trip to Switzerland with Shahrukh and Katrina had to be cancelled after his death.

Yash Raj Films (YRF) is the most dominant production company in Hindi filmmaking. Yash Raj Chopra has continuously featured in the top five hit Indian movies of the year since 2000. The Indian film director and producer used a range of directors. He repetitively used the star power of Bollywood’s most popular actors, Amitabh Bachchan and Shah Rukh Khan.

Yash Raj Films is a highlight of India’s post-colonial identity. It has grown to be the forefront of the global rise of Bollywood cinema. Yash Raj Films have expanded their company from locally based Hindi films to global achievements. They have managed to attract home based and diasporic Indians. Yash Raj Films have used a smart technique by incorporating foreign locations as a site which succeeded.

Chopra was known to often cast the same actors in his films, his most famous collaborations being with Amitabh Bachchan, Shashi Kapoor, Raakhee, Waheeda Rehman and more recently, Shah Rukh Khan.

In 1970, Chopra married Pamela Singh and together they have two sons Aditya Chopra and Uday Chopra,born in 1971 and 1973, respectively. Aditya is also a film director and producer and held the position of vice-chairman and general manager of Yash Raj Films, while Uday is an assistant director turned actor who made his acting debut in 2000 in his brother’s film, Mohabbatein.

On 13 October 2012, Chopra was diagnosed with dengue fever and was admitted to Lilavati Hospital, Bandra, in Mumbai. He subsequently died of the disease on 21 October at the age of 80. 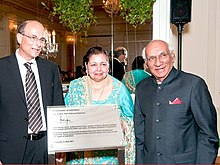 Chopra with his wife Pamela. Yash Chopra is being honoured with the title of Ambassador of Interlaken (2011).